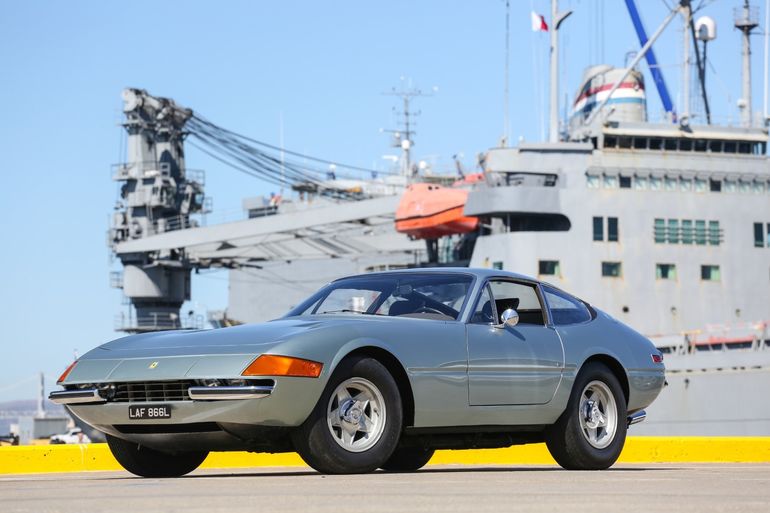 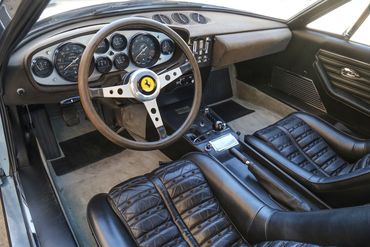 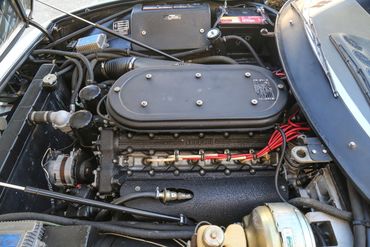 The Paris Auto Salon has always been known for displaying the latest in modern sportscar offerings. But in 1968 when Ferrari debuted the 365 GTB/4, it truly ushered in a new era of sportscar design. The ground-breaking Pininfarina body announced to everyone that Ferrari was no longer content to simply build beautiful cars. This was a monstrously fast and contemporary sports car, poised to dominate the coming decade. Leonardo Fioravanti of Pininfarina created a finely chiseled body design reflecting forward thinking and menacing elegance. The risky move away from the curvaceous but dated 275 GTB/4 placed Ferrari dramatically ahead of other sports cars. The timing was critical and daringly bold for a company facing increasing financial challenges; it simply had to be done. Few knew at that time, however, that the Daytona would be the last of the front engine V12 models for many years to come.

Beautifully appointed and jaw-droppingly expensive when new, the “Daytona”, as it ultimately became known, in honor of the famed 1-2-3 1967 24 Hours of Daytona Ferrari finish, quickly became a fixture of Hollywood movies, record album covers, and television exploits, contributing to their eventual iconic status. Outfitted with the 4.4 Liter Colombo, quad-cam V-12, and breathing through six dual-throat Weber carburetors, the Daytona delivered a whopping 352 hp in stock trim with a blistering top speed just over 170 mph. V12 motoring had never before been so advanced and yet eminently usable, offering fantastic performance and touring capability in a remarkably beautiful package. With a mere 1,400 produced until 1973, the Daytona remains sought after by enthusiasts seeking documented original examples that can be driven with the same passionate intentions that originally fueled their creation.

This particular Daytona is one of the finest genuine preservation grade numbers matching examples in existence. Documented by long term California ownership and supported by Ferrari Classiche documentation, #14989 is further authenticated by factory books and ownership records. According to the original warranty card accompanying the car, this US specification Daytona was delivered to Modern Classic Motor, Reno, Nevada September 1972 and sold new in California by Berkeley, CA dealer Griswold Company to Mr. John W. Ebell of Woodland Hills, CA. The car was serviced by Griswold September 30, 1972 and subsequently meticulously maintained by Ebell and professional experts in Northern California for the ensuing 26 years of his ownership. In 1998, Fantasy Junction sourced the car for a collector in Southern California, seeking a preservation Daytona. The second owner purchased the car that year and enjoyed it until 2004, when it was consigned it for sale with Fantasy Junction and sold to the third owner. In 2012, the third owner consigned it for sale with Fantasy Junction. At this time, the car showed just 23,373 miles. In preparation for consignment, Restoration and Performance Motorcars serviced the carburetors, ignition system, and driveline totaling $5,133.00. In September 2012, with 23,438 miles showing, a pre-purchase inspection was performed by Patrick Ottis for the fourth owner. During Ottis’s inspection the car was road tested and a compression test was performed returning the following results:

Ottis further recorded that the windshield had been replaced, the exhaust system was new, that the overall condition of the car was representative of the original construction, the car maintained the original interior and exterior finishes, and that the wonderful preserved condition was reflective of the miles indicated.

In 2013, #14989 was documented by Ferrari Classiche, receiving a Red Book confirming the originality of the driveline, and that all components were in place, as they left the factory. The fifth and current owner has retained the car in the same manner as previous owners, putting only a few miles on the car in order to preserve the car as best as possible.

Delivered new from the factory in gorgeous Celeste Metalico (Light metallic blue) with Pella Nera (Black leather) interior, this preservation grade, matching numbers Daytona retains the original engine, original transmission, all the original factory body panels, original interior, and the original paint. Currently the odometer shows just 23,786 miles, with the last three owners having logged just 1,000 miles during their ownership. These miles are also validated by the finishes and mechanical condition, ownership documents, and Ferrari Classiche presented with the car.

Given the rarity of a preservation grade Ferrari, the exterior presentation is simply breathtaking. Clearly the car has been stored indoors and used minimally as the paint retains excellent gloss and depth, showing only minor areas of wear in the fine metallic paint. Though not perfect, the exterior impression is very strong, showing use but care in all the surfaces. The front of the car has been preserved from road chips with the addition of a protective clear film. Although the film has slightly yellowed, it can be professionally removed and replaced with a fresh film. All exterior trim, emblems, front and rear lenses, and details are beautifully finished, showing excellent quality especially given the age of the car. The body panel creases, doorjambs, and inner surfaces are all in excellent condition. Chrome throughout is in very good to excellent condition, showing only minor surface imperfections as one might expect on an original car. All openings function as expected with tight closures and excellent factory panel gaps on the hood, doors and trunk. Of particular delight is the crisp snap of the doors when closed; just as it was when new. All four factory 7.5L x 15” light alloy Cromodora wheels show some chips but are still finished in the correct factory silver which still maintain their glossy finish, mounted with chrome plated knockoffs. A period appropriate, but aging set of Goodyear “Police Special” 215/70 VR15 tires are in place, however, are not recommended for extended driving use.

The interior is simply gorgeous with excellent original black leather components, handsome original trim, and that remarkable leather scent still fragrant even after 46 years since the factory installation. The contoured and still supple Daytona seats retain their original factory inserts and padded perimeter bolsters showing beautiful areas of relaxed use. The dashboard is clean and taut, with excellent and remarkably original mousehair material refreshingly fitting snuggly to the surfaces, boasting of the original craftsmanship bestowed on these cars. The stunning instruments, aluminum trim, and smoothly operating switches, all of which function as expected, are all the more remarkable. The factory air conditioning is in place and operable, however, does not blow cold. The black leather console and door panels are taut, showing excellent fit and original factory stitching. The carpeting is in very good condition, lightly faded and showing signs of use, but again, consistent with the original materials throughout the interior. One would be hard pressed to find a more breathtaking original Daytona interior than the one exhibited in #14989.

The engine bay and numbers matching engine are clean and have been properly detailed by service professionals mindful of preservation. In every respect, the finishes have been cared for over the years, without the need of repainting or applying new coatings to any of the components. Of course, there is evidence of use on the engine surfaces, components, and various hardware, but all in keeping with a properly preserved car, driven for enjoyment. The traditional Ferrari black crinkled quad-cam engine finish is just right, not too shiny or thickly applied, as is often seen in some restored cars. Six correct Weber 40DCN 21/A carburetors all sit properly chambered, beneath the black air-cleaner housing, held in place with factory correct finger nuts. Although there are minor deviations in a few pieces of hardware, the proper engine compartment plaques, factory fittings, and hallmark V12 designations are all beautifully presented and correct. Even the correct Magneti Marelli AEC 103A ignition is in place. The trunk compartment is finished off with the original black carpet, showing factory edge beading, and proper fit. Under the spare tire cover, the spare tire, an original tool set, jack, and knock off hammer complete the trunk compartment.

The underside of the car is consistent with the age and finishes one might expect from an unrestored, but properly cared-for Daytona, with factory suspension, brakes, and driveline. A set of correct Ansa exhaust was installed some years ago, but the miles driven have been minimal and the condition reflects this as well. All the proper raw aluminum castings are in excellent condition, including the fuel and brake lines and factory finishes. The correct original orange Koni 82T-1633 front and 82T-1634 rear shock absorbers complete the appearance. The original 5-speed gearbox number stamping reads 60S 727 R10/33 further verified by Ferrari Classiche. The chassis is in excellent condition with no evidence of structural damage or compromise to main components, rocker panels, or suspension.

Pulling back on the distinctive chrome lever handle, the door swings open and you easily glide into place, nestled in the contoured seats. A twist of the key and the V12 quad-cam engine lights off quickly, warming into a wonderful deep and throaty idle. Throttle response is crisp and willing. Engaging first gear, the car moves out smoothly but is eager to deliver so much more. Coaxing the gas pedal down, the Daytona lives up to its name as acceleration builds, revs climb, and that lurid sound commands every ounce of your attention. Brakes are very good as well, overall pulling down uniformly and confidently, even after multiple uses. The gear lever moves through the gated shifter, via smooth synchros, commanding each shift with authority, as revs climb to achieve highway speeds. Downshifting to pass is a breathtaking reminder of the reason why so many enthusiasts evangelize the joys of a manual gearbox, both in driving and increasing market values. Even a moderately experienced driver will delight in the performance of this car. Acceleration, one of the feature points of the Daytona, is particularly inviting at higher speeds, revealing the GT spirit and verve of these cars; built to consume miles of highway at blinding speeds, lustfully charging occupants toward their destination.

Beautifully finished with factory original paint and original leather interior, this preservation grade, low-mile, numbers matching Ferrari 365 GTB/4 Daytona has benefited from careful owners who have thoughtfully preserved and maintained the car to impeccably high standards. Equally at home consuming miles of highway or commanding the highest levels of respect at any top-tier concours or Ferrari gathering, the next fortunate owner will have the pleasure of owning an unrepeatable factory original time-capsule of brilliant design, resplendent performance, and uncompromised excellence.

Single Family Ownership with Just 10,895 Miles From New. A Time-Warp Preservation Candidate to Show or Enjoy,... 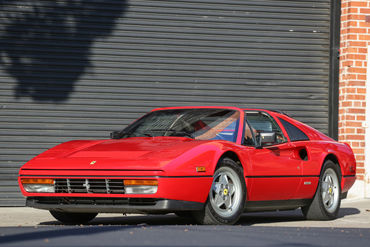