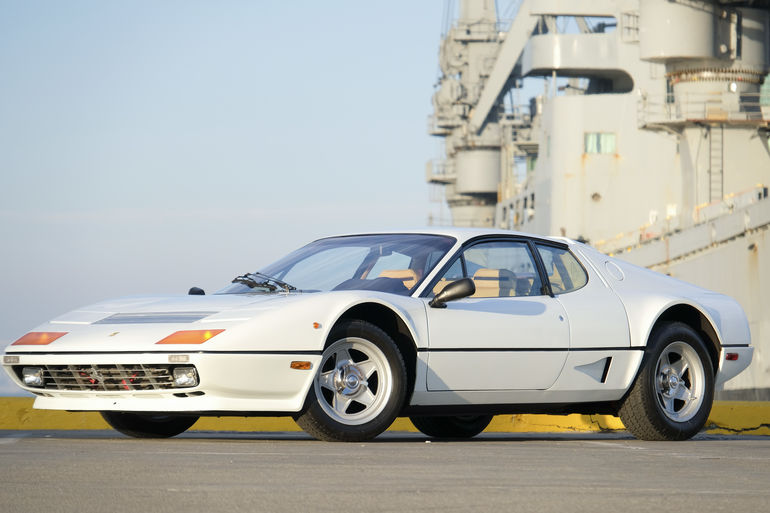 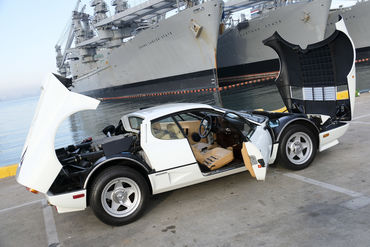 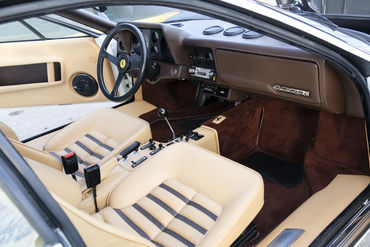 Ferrari has always been a leader in engineering and design. Though many of their most innovative ideas were often plagued with internal struggle, the combined passion and stubbornness always yielded something glorious, perhaps in part due to those struggles. Nowhere is this more apparent than in the launch of the first V12 mid-engine Ferrari. Challenged by the rapidly changing sports car market, Lamborghini had seemingly leapfrogged Ferrari with their Miura, forcing Ferrari to enter into the arena with a full-fledged mid-engine entrant to prove their prowess. In 1971 with the introduction of their 365 GT/4 BB and subsequent production model released in 1973, it was clear that this car would significantly change the future of the Ferrari brand, greatly influencing offerings yet to come.

The Leonardo Fioravanti designed Ferrari 365 was a wondrous delight to all who witnessed these first offerings. Having previously penned many of Ferrari's most celebrated cars including the Daytona, the Dino, and eventually the 308, the clamshell front/rear bonnets, angular but softened fender lines, and impressively wide stance made for a stunning and modern design. By 1976 the 512 engine was updated and again in 1981 as the last update in the series with the Bosch K-Jetronic CIS fuel injection, which added to the sublime V12 engine power and delivery. Surprisingly the term BB, long referred to as Berlinetta Boxer, was not the original named intent. Ferrari engineer Mauro Forghieri suggests that the name association was the assumption of motorsports journalists when in fact it was designated Berlinetta Bialbero or dual camshaft. Either way, the BB moniker continues to be among the most desirable of Ferraris with growing interest in superbly preserved low mile examples with known histories since new.

This truly stunning and rare 512 BBi is one of just 1,007 cars constructed in the last series of production. Completed at the factory in 1983 as a European model, the car was imported to the US and federalized by Prancing Horse Farms, Edgewood, MD before receiving EPA certification April 23, 1984 (copies of US EPA documents accompany the car). In 1988 the car was offered for sale by Ken Owen, Sarasota, FL. In 1989 the car was next offered for sale in the Ferrari Market Letter by Brett Joiner, Dearborn, MI. By 1991 Oregon dealer Ron Tonkin purchased the car from Joiner who then sold the car in 1998 to Portland, Oregon resident Gene Dietzman. During his ownership Dietzman had the car serviced replacing air filters, gear oil, engine oil, and brake fluid annually, retaining careful handwritten notes of all his services. In 2003, Tonkin sold the car again on consignment from Dietzman. In 2018, the car was sold by Fantasy Junction. During the recent and former periods of ownership, the car has enjoyed exceptional care and thoughtful mechanical attention in order to maintain it to the highest levels of excellence. Recent mechanical work includes a 2016 engine-out service replacing all fluids, filters, and timing belts, drive belts, and replacing both brake and clutch fluids. The valves were adjusted, cam timing set, and cam seals and tensioner bearings were replaced. Also, at this time, both left and right fuel pressure accumulators were replaced. In 2018 an oil/filter change was performed, a new A/C control plate installed, a trickle charger lead installed, and a general inspection of the overall condition of the car was performed.

Among the various items improved on the car, in 2005 an Evans Automotive “Super Sports” Type 304 Austenitic Stainless Steel exhaust system (guaranteed for 25 years) was installed (the original unit is still retained with the car). The car has also been updated with an aftermarket ignition system that performs very well. The stereo unit installed in the car is an OEM unit which was delivered with the car when new. The stereo equalizer is the same brand however was installed in the car in 1991. During the federalizing process for the car, the instrument faceplates were changed out but the odometer reading, being a mechanical unit, remained in the car, continuing to record accrued mileage in kilometers, which it continues to do today. Records for service indicate a consistent and documented sequence of kilometers recorded on this car since new.

Today, showing just 19,630 kilometers, this beautifully preserved Ferrari presents as a wonderful original example throughout. The original paint is in excellent condition with high luster and great gloss to the white finish applied at the factory, confirmed by 6-10mil by readings achieved when metering the body surfaces. In 1991 the right rear tire had a blowout causing minor cosmetic damage to the fender lip which was repaired and blended into the overall finish. Although some minor road chips are noted at the front of the car on the lower airdam edges, and a small area on the right rear of the bumper has a paint imperfection, the remainder of the finish is in excellent condition throughout. The clamshell hood and rear engine lid open and shut smoothly, displaying very nice fit with even panel gaps and excellent closure. The doors open and shut without issue, with superb fit and preserved inner paint surfaces. The black trim remains in excellent condition with no major flaws or notable fading due to excessive heat exposure. The wheels are in excellent condition with some minor chips in the silver finish. The factory correct chrome plated knock offs add a nice accent to the cast wheels shod with Michelin TRX tires still showing plenty of tread. The glass appears to be original and in excellent condition as are the various window gaskets, black trim, and Ferrari emblems and badges throughout the car. The unique lenses and lighting appear in excellent condition, further supporting the superb preservation and low mile accumulation this car has enjoyed since new.

Inside the car, the tan leather interior has a very satisfying, clean, original appearance and feel that only properly preserved original materials can convey. Stunningly crisp and still in near new condition, the leather is exemplary in every respect, still very soft and supple, with a comfortable feel to it, accented against the chocolate brown dash trim and black inserts. Minor bolster wear is evident on the driver’s left side and seat bottom corner but otherwise the interior finishes are very nicely preserved including the tan covered center console and door panels which also appear nearly as new. The chocolate brown carpeting is in very nice condition and the entry door sills are surprisingly clean and show no marks of significance. Instruments and steering wheel are in excellent condition with no fading or unusual wear. The front trunk compartment is also in excellent condition with original black carpeting and factory correct materials in place. Under the spare tire compartment covering, the original type Michelin spare tire is mounted to the factory rim snugly fit inside the front tub, strapped in place with the factory belting, likely only removed for detailing. Even the tufted hood insulation panel is in excellent original condition.

The engine compartment has benefited from a 2016 timing belt service performed to meet the recommended service for these engines, but also all parts and surrounding engine bay area was cleaned, and all fluids were changed while the engine was out. The air intake boxes, unique fittings, and fuel injection unit all retain original visual appearance without modifications, properly preserved, with particular attention to the lines, wires, and hoses all of which appear in excellent condition. The twin cast aluminum intake plenums and inlet tubes proudly sit atop each bank of the amazing V12 engine, boasting the added horsepower offered in the BBi engine. The A/C system blows cold, having been converted to R134a by Ron Tonkin per the 2003 label affixed to the inner compartment. The updated electronic ignition box is discretely concealed along the bulkhead. The handsome cast aluminum features are a significant part of the visual engagement of these mid-engine Ferraris when opening the rear decklid particularly with modest amounts of patina, honestly acquired by careful owners. Factory finishes and original data plates, coded labels, and warning information items remain in place. The underside of the car is tidy, clean, and no visible structural damage of any kind is evident. The factory underside belly pans are in place showing little signs of scuffs or scrapes. Some evidence of road use is present and in keeping with the mileage shown on the odometer, but overall, the car is very nice with a visual condition consistent with the preservation and dutiful maintenance performed on the car.

The car starts quickly cold or warm, idling smoothly and evenly in part due to the thoughtful service and careful considerations given to the fuel injection, updated ignition system, and regular fluid changes. Recent service confirmed the major systems to be operational including the A/C which functions properly. Driving this 512 BBi one is reminded of how astounding the power and delivery is in a mid-engine car especially when compared to nearly any other performance car of this era. This 512 BBi is not only impressive for the power and smooth delivery via fuel injection, it is also an exceptionally well balanced road car with great feel to the chassis and suspension. When pressed more aggressively, power comes on like a hurricane especially in the higher rev range offering a continuous leap of speed in each gear. Shifting is very comfortable via the 5-speed gated shifter and smooth take up from the clutch. Braking is quite good even when coming down from high speeds. Most impressively, this well-sorted 512 BBi delivers expressive power and great rev-range without the unpredictability often presented with carbureted cars.

This remarkable Ferrari BBi is accompanied by copies of documents showing various owners, statements and previous hand-written ownership service records, invoices for professional services performed on the car covering the past 25 years, the owner’s manuals in the original Ferrari case, a BBi brochure, a set of floor mats, the OEM exhaust system, a set of original factory tools and tool roll, jack, hammer, and bag with spare belts, and a car cover.

Ready to offer the next fortunate enthusiast an unparalleled ownership experience of supercar power and performance, this rare and desirable last series Ferrari 512 BBi has always enjoyed thoughtful preservation and consummate care throughout its coveted life. Celebrated for the combined Pininfarina design and dynamic mid-engine V12 performance, the driving experience is a welcomed engagement to the lost era of cars when manual shifting, raw power delivery, and driver focus truly embodied what it meant to drive a sports car of superlative design and construction.