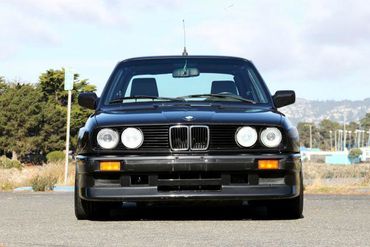 Automotive superlatives accompany some of the greatest cars of all time. Yet there are some cars that seemingly transcend mechanical greatness or design excellence, retaining superiority even decades after their introduction. The E30 BMW M3 is one such car. Launched in 1987 as a homologation road car with competition in mind, the M3 became something of a legend, both on and off the track, dominating race after race, while building a near cult-like following of rabid performance enthusiasts. The “M” moniker lived up to the Motorsport name using the S14 197hp engine linked to a 5 speed gear box, all of which nestled perfectly into one of the nicest “box-flared” cars ever derived for road use. In recent years, early M3 series cars have become highly sought-after, in part due to their lack of iDrive, computer screens, and driver controls - pure stick shift driving machines offering iconic performance and precision to even nominally skilled drivers.

This two-owner example was purchased in 1991 from the original owner, an enthusiast who is believed to have won a National Title with the car. The current owner, himself a well-respected BMW enthusiast, won the 1983, 84, and 85 BMW North America Motorsports Trophy in his 320i. The current owner acquired this M3 when his wife, was captivated by the performance, taken for a drive by the (then) owner, who had recently won an SCCA Solo II Championship in this very car. Commenting that it was for sale, her husband (and second owner) purchased it sight unseen. During the current ownership the car has been used twice with BMW CCA at Laguna and Thunderhill racetracks. At the Thunderhill practice, the car encountered oil on the track, resulting in damage to the passenger side body. Repairs were limited to the exterior body and the car continued to compete throughout the weekend at the racetrack. The passenger rear quarter, passenger door, and passenger front fender, were all replaced with correct parts. Factory specification “Diamond Schwartz” paint and proper body work was completed by John Siau. This damage is not indicated on the Carfax as the incident did not occur on the road and the owner paid for the damage himself.

Throughout the course of current ownership, this car has received thoughtful care and attention as needed. At 100,000 miles, the decision was made to enlarge the engine bore rather than sleeve the cylinders. The rebuild included 95 mm factory high compression pistons along with a special alloy 87mm stroker camshaft, which was radiused, employed lightened counter weights, hollowed throws, and utilized a hardened front pulley bolt. All of this increased the stock displacement from 2302cc for the S14 B23 to 2467cc for the S14B25 Kat EVO3. At this time, a Borla exhaust was also installed. The rear end was rebuilt with a new 4.1 to 1, replacing the 3.4 to 1, resulting in better acceleration. Front and rear Racing Dynamics strut braces were installed, double adjustable Koni Shocks, and racing front and rear sway bars were also added. The car currently runs on Yokohama tires with 16 x 8 BBS (RK) wheels, however the current owner has retained the stock 15 x 7 wheels, which are included with the sale. General services have been performed on the car throughout its life, much of which has been handled by BMW experts at IPB Autosport, including the engine rebuild. In 2017, the A/C was recharged and serviced.

Currently showing 124,000 miles, it should be noted that racing has been a major objective on this M3, which is reflected in the overall condition. The car displays very good paint showing glossy finish with a few road chips along the leading edge of the hood and in a few other areas of the front fascia as well as some minor surface blemishes along the window trim and bumper caps. The BBS wheels are in very good condition, shod with wider tires that give the car a strong visual stance, echoing the racing heritage of these cars. Lights, trim, and various cosmetics around the car show evidence of use, but still present a cohesively pleasant visual impression consistent with the rest of the car. The interior has been well preserved and shows nicely including the grey leather seating, which remains in original condition. Door panels, headliner, and carpeting are also in good condition overall showing only a few small areas of wear. The black dashboard, center console, and steering wheel remain in very nice condition as do the instrument and control panels. In all the interior presents handsomely, with original components and appropriate care. The trunk of the car remains largely stock with tools, spare tire, and jack.

Under the hood, the engine compartment reveals the racing heritage and thoughtful performance improvements prepared on this car, including an Acusump oil accumulator. The engine compartment is clean and tidy showing a combination of factory original equipment and updated performance features. The underside of the car is in good condition, consistent with the accumulated miles. There is evidence of use at various jacking points, as one might expect from a car that has spent time at the racetrack.

The car starts easily and settles into a nice, throaty rumble exiting the Borla exhaust. The clutch and gearbox engage smoothly without issue as the car exhibits excellent acceleration with smooth power delivery and surprising pull as each gear erupts new excitement. The added performance power is clearly evident in the performance capacity this car exhibits once warmed up, exploring the higher rev range. Freeway speeds are rapidly achieved with ample power on hand, testing the limits of experienced drivers. Cornering is excellent - as the car has been properly set up with Konis and sway bars for apex assault and re-entry. The combination of power and handling are nicely matched on this car, resulting in a driving experience that validates the superlatives devoted to these cars even in stock trim.

A capable and surprisingly nimble car, the M3 continues to reign as one of the most brilliantly engineered homologated street cars ever assembled for public consumption. Driving manners, performance, and iconic box flare design all combine to make the BMW M3 one of the most sought after performance collector cars available from the 1980s. Prepared and assembled by professional BMW racing experts, this M3 offers miles of performance enjoyment, ready for a driving-minded enthusiast to immediately enjoy and further enhance as needed. 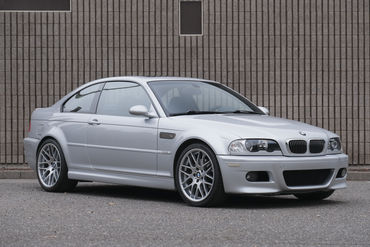