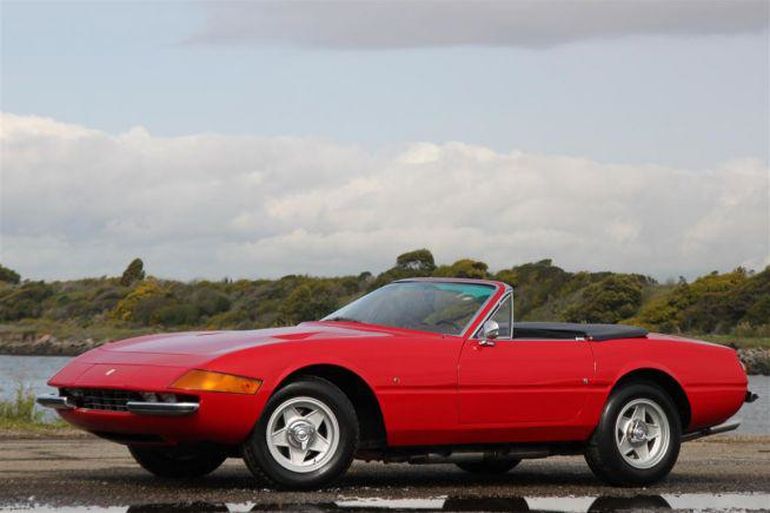 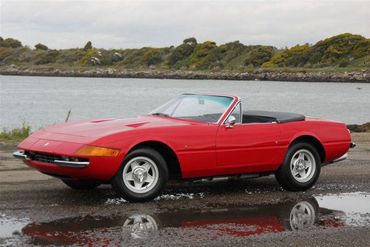 Originally shown at the Frankfurt motor show in 1969, the Daytona Spyder was almost instantly collectible. Only 124 genuine Daytona Spyders were built, making them exceedingly rare finds, and prohibitively expensive for most private individuals today. In spite of their rarity, or perhaps because of it, they found their way onto the silver screen on such memorable occasions as in `The Gumball Rally` (who can forget Raul Julia’s opinions on the topic of Italian driving: “What is behind you is not important!”) and also in ‘Miami Vice’. As a result of the collector car boom of the late 80’s, many coupes were reconfigured to replicate this legendary open GT car, and today high quality conversions to Spyder format are accepted cars in the Ferrari enthusiast realm. Fetching prices similar to a Coupe of the same quality and condition, Spyder conversions represent excellent open V12 motoring value.

This particular example was produced by Ferrari in late 1970 as a Coupe painted in Argento Autueil, and delivered in February 1971 by the dealer/importer, Maranello Concessionairs-gb, as a European specifacation car. By 1973, the original owner had traded s/n 14047 back to a Ferrari dealer as part payment for his new Ferrari 365 BB. This car was purchased by a Mr. Tippens, a UK resident, who owned and enjoyed the car for regular road use until 1979 when Mr. Tippens’ banker had a minor traffic incident while borrowing the car to go to lunch!. Mr. Tippens’ saw the dilemma of his damaged Daytona as an opportunity, having long since admired his friend’s genuine Daytona Spyder. Using that Spyder, as well as a genuine alloy bodied Daytona Competition Coupe (under the same ownership), s/n 14047 was re-skinned using alloy panels to its current Spyder form in 1979-1980. The panel work is top notch throughout- in many ways better than what left Maranello- and speaks to a largely bygone time of English cottage industry metal crafters.

Mr. Tippens sold the car to Robert M. Lee of Sparks, Nevada in 1984, who imported and owned the car for some twenty two years, selling it via RM Auctions at Monterey in 2006 to a Mr. Baltzer of Atlanta, Georgia. During his ownership, Mr. Baltzer had Foreign Cars Italia in North Carolina perform service work as necessary including regular tune ups, and recent replacement of the soft brake lines, among other works.

Today the car runs absolutely beautifully. The engine starts easily, revs freely, and produces good power, with no noticeable smoke. When recently tested, the compression readings were even on all twelve cylinders. The transaxle shifts smoothly with well adjusted linkage and good synchros both up and down, even when cold. The lights, gauges, and horns all appear to be functional, including the clock. The suspension is responsive and compliant, the brakes effective and balanced. The underside is particularly dry and appears to be free of any major fluid leaks. The standard, often troublesome exhaust system has been replaced with a high quality stainless steel three-canister system likely to last much longer than an Ansa system.

The car is in very good cosmetic condition. The paint has very few flaws, and presents exceptionally well. The brightwork is also very good, as is the window glass and lenses. The convertible top is well fitted to the car, and free of tears, but showing some age. The car sits on beautifully restored Cromodora wheels with correct Michelin XWX tires.

The interior is also in good condition, with a beautiful original dash, correct gauges and switchgear, and correctly sculpted Connolly leather seats with the headrests removed. The carpets are nice, with only minor wear and tear.

The engine bay has seen considerable recent restorative work and is absolutely stunning. Indeed, the level of detail achieved in the engine bay is consistent with that of an outright show car. Correct finishes and factory decals have been applied where appropriate, and the often missing window washer bag is still in place. The underside, while not overly detailed, is structurally outstanding and representative of a very well cared for example.

Included with the sale of this example is an impressive and complete tool/jack roll, and the matching Cromodora spare wheel with tire.

Road and Track described the 365GTB/4 as “the best sports car in the world-or the best GT. Take your choice; it’s both.”, and indeed it remains one of the greatest and most legendary cars ever made. This particular car is truly ready to enjoy. It is nice enough to casually show, but not so nice as to restrict the new custodian from enjoying it on an expanding number of road rally events. 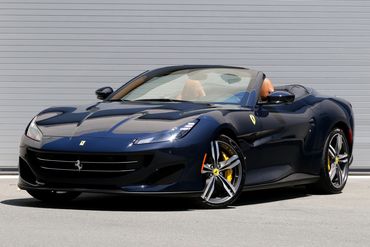 Beautiful Color Combination with Over $60,000.00 In Options! Low Mileage Example, Accompanied by Books and Tools.