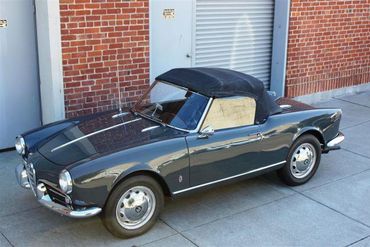 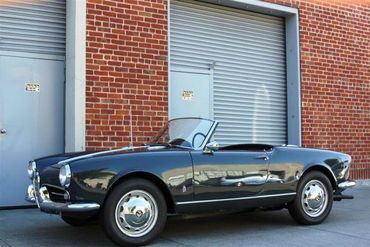 The Giulietta, and later the Giulia are the cars that took Alfa Romeo from being a relatively small production company to being an economically viable and successful firm. Prior to that, they had produced large and expensive cars, and never in very large numbers. With the Giulietta/Giulia, however, Alfa Romeo produced significant numbers of these charming and capable cars. Its success was due in part to its unique placement in the market. It was neither a large hugely expensive car, nor was it very small utility car (such as the Fiat 500). Instead, they were affordable enough so that many could buy them, yet permitted a more glamorous and useful approach to motoring that really struck a chord with buyers on both sides of the Atlantic. The Giulia Veloce enjoys the honor of being the highest performing and most developed open variant of the line, thanks to its 1600cc version of the venerable twin cam engine, twin Weber carburetors, higher compression ratio, and hotter cam profiles. Performance was much improved over the standard car, and as is often the case with Italian cars, the latest models are the most technically developed.

This particular blends the pleasing aesthetics of the earlier “750 Series” chassis with its shorter wheel base, hood spear, and smaller rear tail lights, with the slightly larger and more powerful 1600cc Giulia engine, and 5-speed transmission. While originally delivered as a single carburetor “Normale” model, this example has been upgraded with Veloce twin Weber carburetors, and from the fantastic, free revving engine note, Veloce specification cams and high compression pistons as well.

Best described as a driver quality example, with fresh paint to similar standards, this car will appear to the Alfa enthusiast with a knack for light restoration. The car runs and drives, with very good power, little or no smoke, excellent brakes, good clutch, and a function transmission with light bearing noise. The suspension and steering box are both good. The body and chassis are solid, with no major rust or rust repairs evident. Cosmetically, the car has a uniform driver quality appearance. The chrome, paint, interior, engine bay, and trunk are all satisfactory. The car is generally original in its appearance, including the steering wheel, wheels and hub caps, seat upholstery, gauges and switch gear.

As is so often the case with Italian cars of this era, improvements are possible in several areas. The doors could be adjusted to shut better, as could the convertible top. The motor mounts may be somewhat tired, as the carburetors touch the inner fender well at idle. The fuel gauges does not appear to read accurately, which is common to Alfa Spiders. There may be other minor mechanical defects that we are not aware of, and accordingly, we welcome pre-purchase inspections. We have taken this information into account when pricing the car. The car is sold “as-is”, in its current trim.

While we do not have considerable background on the previous history or restoration work, this example’s structurally solid nature, early build date, attractive color combination, and outstanding specification will make it an appealing purchase for the Alfa enthusiast looking for an inexpensive, event eligible car, with an option to make some value added improvements during his ownership. 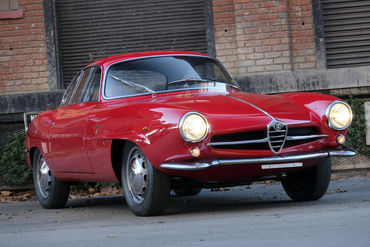