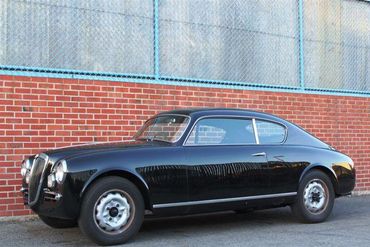 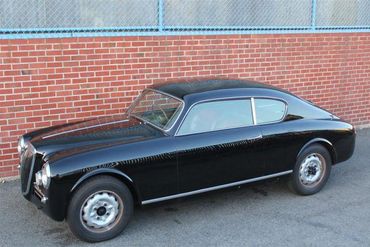 An Exceptional Survivor Example with Nardi Equipment and $80,000 Worth of Recent Mechanical Work by Tony Nicosia. A Superb Running and Driving Car.

Famous for their incredible craftsmanship, innovative engineering solutions, and complete disregard for cost accounting with respect to those engineering solutions, pre-Fiat Lancias are, in many ways, in a class of their own. Few cars are as thoughtfully engineered or built, which helps to explain why Lancia encountered a great deal of financial troubles. The Aurelia was first conceived during World War II, and was powered by what is considered to be the world’s first production V6, which included hemispherical combustion chambers. To improve weight distribution, later versions included a rear-mounted transaxle unit including clutch, inboard rear brakes, and independent rear suspension (which would later be supplanted by a de Dion rear end). Contemporary road testers marveled at the car’s refinement, exceptional build quality, and roadholding. They found the car to be highly capable and a joy to use, with the magazine The Autocar going as far as to claim that the Aurelia was “one of the most desirable sporting cars of the decade”.

The cars proved to be highly successful in competition, with perhaps the Aurelia’s most shocking achievement occurring at the 1951 Mille Miglia. The factory entered four Aurelias, and the car of Giovanni Bracco and Umberto Maglioli soon left the 2-liter competitors behind and began closing on the overall leaders, who were piloting cars with 50% to 100% more displacement. In the torrential rain, the 2.0 liter 80hp Aurelia closed five minutes on the leading 4.1 liter Ferrari 340 in the second to last leg alone, and was still closing at the end of the event, placing second overall! The Aurelia lost by 20 minutes in a 13 hour race, amply demonstrating the capability of both drivers and car. The Aurelia met with countless other competition successes, including another class win on the Mille Miglia plus further class victories at the Le Mans 24-hours, Coppa d'Oro delle Dolomiti, Pescara 6-hours, Carrera Panamericana and Targa Florio, among others.

Late B20’s and B24’s, such as this car, are fitted with a significantly more powerful 2.5 liter engine and styled by Pininfarina, are among the most developed and desirable of the Aurelias. This particular car is a late 4th series car, and is reportedly the last right hand drive 4th series car built. It is equipped with original Temperato glass as well as desirable and attractive Jaeger instruments. The car is believed to have been imported from Europe in the 1960s and the current owner bought the car in 2011 from a long term owner who had purchased it in the early 1980s. The car had been stored for many years by that period, and Lancia Aurelia guru Tony Nicosia comprehensively recommissioned the car from Fall of 2011 to Fall of 2013 to bring the car to its current mechanically sorted state.

The recommissioning included about $80,000 worth of work and encompassed the entire driveline, as well as the front suspension, fuel system, and brakes. The transaxle was completely overhauled, including the fitment of a new first gear. The clutch and driveshaft were replaced and rebuilt as necessary, and the entire assembly balanced, which is critically important on Aurelias because they are transaxle cars and thus have driveshafts that turn at engine rather than road speed, which is why so many Aurelias have driveline vibrations. The wheel cylinders were replaced and the drums precision ground to ensure vibration-free operation as well. The brake master cylinder was also replaced and the reservoir for the suspension and brakes was also rebuilt. The starter was also rebuilt and the engine tuned, and sorted, but not rebuilt as it has good compression and runs extremely well following its fettling. The upper radiator manifold gasket and hose were also replaced, the fuel system flushed including restoration of the fuel tank, and the front suspension rebuilt.

The car has cosmetic patina but is wonderfully intact and fundamentally unmolested. The paintwork has checking and crazing in places, but the body is extremely straight with excellent fit, gaps, and panel operation. Mr. Nicosia reported that the car appears never to have been hit. The body has some bubbling in the rockers and wheel arch lips but is otherwise free of corrosion. The chrome is generally in good condition with minor pitting. Trim is complete and in sound shape other than the rear bumper, which is missing. The front bumper is included but not installed.

The interior is substantially original. The car is fitted with red leather seats from a B24 with plenty of patina, but the interior appears otherwise quite original. The original color combination of the car appears to have been metallic grey exterior with two-tone saddle leather and grey wool. The gauges and dashboard are in excellent shape and the car has nice rubber mats of the correct type, which are likely original. The door panels and rear parcel shelf are in very nice original condition, as is the wool headliner. The car is equipped with flat Nardi steering wheel in very nice shape, as well as a host of other Nardi equipment. The car is also equipped with floor shifter and Nardi air intake, manifold, and dual carburetors.

The engine compartment is correct in appearance and retains the desirable Nardi equipment which was almost certainly fitted in period. The carburetors have their correct black finish. The inner fenders and indeed most of the engine compartment have a solid, honest, and authentic unrestored appearance and the car retains its correct and unique equipment including including heater core coolant valve, thermostatically actuated radiator blinds, and suspension lubrication reservoir. The trunk is in similar condition, being unrestored, correct, and intact in presentation with some patina.

The car runs and drives superbly, a reflection of the thorough and capable preparation and restoration work it has seen. The engine starts easily and sounds superb. The choke works properly and the engine is extremely well turned, with smooth power delivery, impressive eagerness, and exceptional throttle response. Mr. Nicosia reported that the engine was among the most responsive Aurelia units he had ever experienced, suggesting that a light flywheel may be fitted. The transaxle works beautifully and the driveline is free of vibration. The handling is confident and engaging, and the brakes are linear and capable. The entire experience is wonderfully coherent and it is no surprise that these cars are so popular for events.

This is an exceptional opportunity to acquire a superb survivor quality B20. Fundamentally unmolested and desirably equipped with much Nardi equipment, probably from new, this car has exceptional integrity and is now a superb running and driving example that has seen extensive work by one of the world’s foremost Aurelia experts. The car can be driven confidently as is, or would make a straightforward car to take to the next level. It wears its age with grace and its condition speaks to the careful use and storage that it has enjoyed since new. 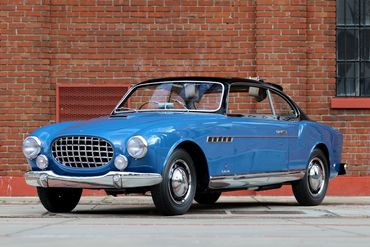