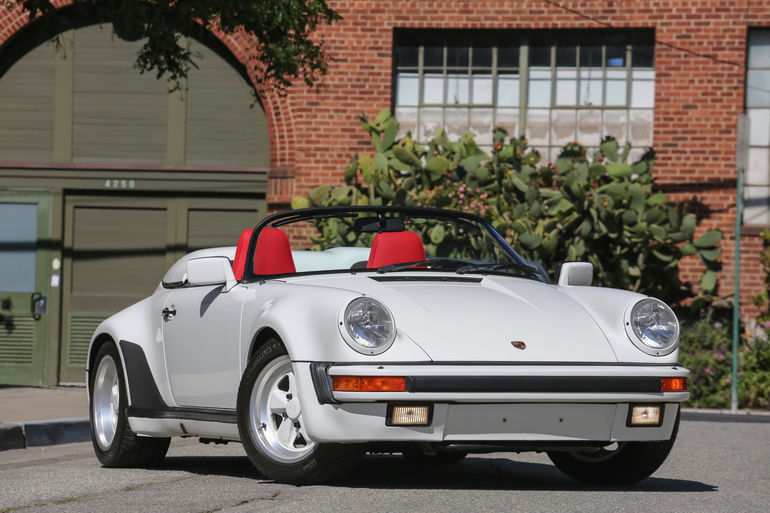 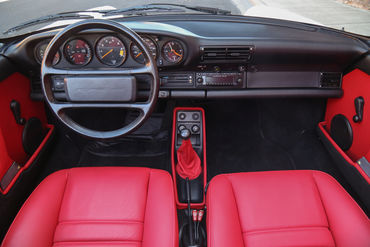 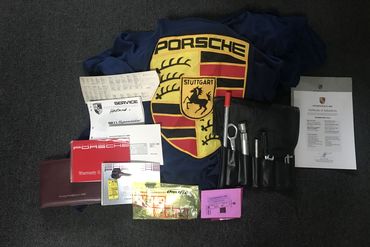 In 1989 Porsche assembled their final iteration of the G-Series torsion-bar based 911 chassis – the Speedster. Designed with reverence to the iconic 356 Speedster, the car was developed as a heritage statement using the very best in Porsche technology available at that time. Utilizing the 911 Carrera as the platform, the 1989 Speedster was produced for only six months, in part because of the high cost and near hand-built nature of the vehicle - just 2,104 were built. Rarer still, a mere 802 were delivered to North America under US specifications equipped with Standard US Emissions. Since its debut more than thirty years ago, 1989 Speedsters have become highly sought after particularly for their combined rarity and fantastic driving manners.

As the last of the astonishing 25 year run of the venerable air-cooled 911, the Speedsters were built with design simplicity and road-going purity in mind, much like the original 356 Speedsters. As such, there is no power steering, no ABS, and only one computer aiding engine management: the ECU that delivers precise information to the 3.2 liter 231 hp flat six. All Speedsters were outfitted with the highly desirable Getrag G50 5-speed transaxle, which featured improved durability, better synchromesh, and a hydraulic clutch. Power assisted, cross-drilled, and ventilated disc brakes with alloy calipers performed stopping duties, peeking through 16” diameter Fuchs forged alloy wheels.

The convertible body design was highly refined, most prominently featuring a lower profile windscreen (cut three inches shorter) and raked back five more degrees to achieve an aggressive, hunkered down look. The convertible top was a lightweight single layer of material intended for temporary use only, and when raised in position, gave the car a striking and visually unique appearance. The quarter windows were removed, and door glass properly shaped to accommodate the new roofline. Rarely does a car look so good both with the top down and up. In the case of the ’89 Speedster the top-up delivers the goods and also offers weather protection. To further enhance the historic reference to the original, the rear seats were deleted, and the rear compartment covered with a fiberglass hard shell cover painted to match the car’s exterior. All of these changes not only improved the overall looks and unique character of the new Speedster, typical for Porsche, these changes delivered substantial weight savings even down to details that included manual crank windows and eliminated central locks.

According to the recent Carfax, the car was delivered to Logan, Utah where the first owner retained the car until 1994. Subsequent ownership and regular services are noted as miles accumulated at a consistent but limited rate. In 2013, with approximately 16,000 miles, the car was serviced, new tires installed, wipers replaced, battery replaced, and a four-wheel alignment performed. In 2014, with 16,400 miles, the shift linkage was repaired, and shifter bushings replaced, exhaust pipe seal replaced, valve cover gaskets replaced, engine oil cooler line repaired, drive belt replaced, crankshaft oil seal replaced, and an oil and filter service performed. Currently 18, 800 miles are showing on the car, which is consistent with recorded mileage accumulated and displayed since the initial 1989 Carfax entry and subsequent multiple mileage entries.

Today this beautiful Speedster exhibits not only wonderful and unique colors, it has been preserved and thoughtfully cared for by previous owners. The paint on the car has been checked with a digital paint meter. All the major body surfaces verify that this is the original Grand Prix White paint sprayed at the factory, with the exception of the hood, which appears to have been repainted very likely to improve cosmetic condition attributed to typical stone chips. The paint is beautiful throughout with high gloss and no marks of significance. The lower rocker surfaces, front valance, and rear fender flares are free from major chips or damage, with one or two minor imperfections evident when viewed on the lower portion of the rocker panels. The glass and windscreen are in excellent condition. Lighting, trim, and emblems are also exemplary, indicating mild road use and indoor storage over the years of ownership. The black canvas top has a tight fit to the windshield frame and shows beautifully on the car. The wheels are free from edge marks or curb rash, offering a unique appearance with factory Grand Prix white painted inserts. The Michelin tires appear to be the set of four installed in 2018, showing minimal use, confirmed by the miles noted when they were installed.

The interior is striking and, once again, very unique. The upholstery, carpets, dashboard, instruments, and switches all appear in excellent visual condition. The contrasting red and black interior elements against the white exterior truly make for a stunning appearance. The instruments have bright color and clarity, and the dashboard exhibits fresh textures with no significant visible wear. The red and black console is handsomely trimmed, once again giving a unique visual appearance to the interior. The optional leather wrapped steering wheel shows some evidence of use around the rim, however considering the rarity of this special-order original option it is important to retain the original finish. The leather seats display excellent finish with no evidence of wear or bolster marks. The carpeting is in excellent condition, showing only some wear in the foot-wells and driver’s floor mat. Door panels show no cracks or flaws and are smooth and clean, again featuring red and black unique and stunning color contrast.

The engine compartment is clean and appears unmodified. The factory finishes appear consistent with the recorded miles, with mild evidence of typical age to the casting finish on the air impeller and housing. The remaining engine components and details are quite nice overall. The front storage compartment is also in excellent condition, with no modifications and very nice visual presentation. The correct red rim space saving spare is in place as are the factory labels, paint code labels, and factory tools. Underneath, the car displays original components with typical evidence of use but still retaining the overall factory finishes, proper fittings, and accuracy, which has become harder and harder to find even in a 30 year-old car. There is no visual evidence of structural compromise when viewing the floor or major suspension attachment points on the car.

The car starts instantly and immediately settles into a smooth idle. The G-50 5-speed gearbox and clutch work smoothly together through all gears. The 3.2 liter engine, braking, and steering were among the top levels of performance when new and these same traits are repeated in this fine example delivering solid and smooth road manners – a tribute to Porsche engineering when new, echoed in their preserved endurance offering enthusiastic enjoyment for a new generation of collectors. Included with the car is a host of original items offered at delivery when new including owner’s books, Porsche owner’s pouch, tools, tool roll, and radio service booklet, as well as a copy of the recent Carfax and Porsche Certificate of Authenticity.

This is an exceptional opportunity to acquire a highly optioned low mile 1989 Porsche Speedster offered in fabulous colors. As the final 911 iteration, the 1989 Porsche Speedster is one of only 802 examples built for the US market. This car is ready to be driven, shown, or continually preserved as an ongoing and enjoyable tribute to Porsche excellence and the timeless legacy of the original Speedster.